In “bodies in tubes” an installation made of rubble chutes becomes the setting for the current work by Saskia Hölbling and Laurent Goldring. After “body in a metal structure” and “bodies (with)in fences”, “bodies in tubes” forms the third part of the "Squatting Projects".

As if drying, a vertical chute system hangs in the belly of a room, a dissected section of the pulsing arteries of our city, which in endless connections drive invisible cavities in our floor.

In this organic exposé, two bodies comb through the inflow and outflow guidance systems, the proliferation of entries and exits, the many diversions and turnings: they come up against dead-ends, against one another, wedge themselves in niches and stream out of gaps, are absorbed or thrown out.

The boundaries are different here. Anxiety and protection go hand in hand, inside and outside become blurred, organisation and artifice form a new organism. Here plastic can breathe, the human body becomes an aspect, a segment of a suprabody. It becomes part of a territory that belongs to nobody.

What is visible are the effects and echoes of the movements.


A DANS.KIAS production.
Co-produced by Tanzquartier Wien and the Centre Chorégraphique National de Franche-Comté à Belfort, supported by the Saline royale d'Arc-et-Senans in the frame the Odyssée residency program. Subsisdied by the Cultural Deparment of the City of Vienna and the Austrian Federal Ministry for Education, Arts and Culture. 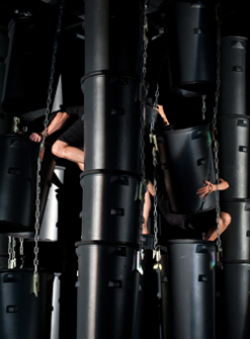