In her current work Assemblage humain the choreographer Saskia Hölbling shows collages of the human that are not put together fragmentarily but arranged fluidly and give time for contact spaces. Contemporarily cool, but without fear of expressiveness. This is how two worlds are juxtaposed.

The first, dystopian, existential. In an archaic environment of felt, wood, leather and linen, performer and a life-size human figure meet one another and together use the objects – a blanket, seat, broom, stick and jacket – to create assemblages of elementary human relationships: on this world and the beyond, life and death, war and mourning, love and gentleness, ecstasy, daily rituals and absurdities – a Guernica where the horse and the bull, where death and the maiden repeatedly have something to do with one another.

There is a break in the work, the second world covers the remains of the first. Likewise dystopian but more exposed, garish. An act of evisceration opens up, coloured plastic and objects appear, a pile of trash. The assemblages here are more artificial, flashier, trendier:
Arising out of the plastic skins, a parade of the objects begins and rises into an orgiastic dance of the materials that finally make the bodies disappear. 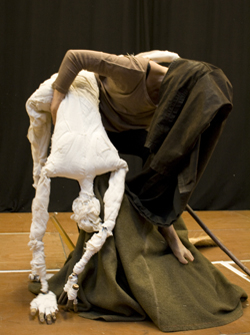