Five dancers packed into all-over lycra suits. With each physical gesture they sketch out an independent pictogram, in which signs, roles and classifications change in the blink of an eye – between masculinity and femininity, between individuality and the collective, between fiction and reality. They test and play with the comprehensibility of the hermetics of codes, and their movements thematise the relationship between representation and communication, habitus and body language.

With "pictographic events" Saskia Hölbling continues her artistic research into graphic, organic and acoustic signs and in the process has created a choreographic work that speaks out against the “globalisation of signs” and for the greatest possible diversity and uniqueness of understanding.

From its foundation in 1995 until today, DANS.KIAS has produced more than 20 works. With “pictographic events”, DANS.KIAS is thus at the same time celebrating its 15th anniversary.

A DANS.KIAS production. Co-produced by Tanzquartier Wien.
Supported by the Cultural Department of the City of Vienna and the Federal Ministry for Education and Culture. 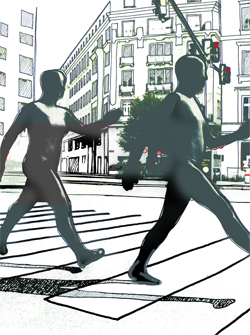